Tremendous credit must be given to Sanigar Events for putting together a superb night of boxing due to take place on Saturday 27th October at Neport Centre. 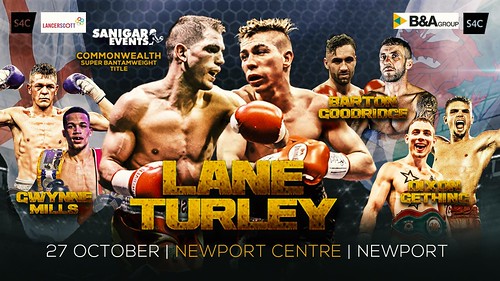 The evenly matched Super-Bantamweight fight between Turley and Lane has really had the boxing public talking ever since it was annouced quite a few months ago. Turley won this title back in April in thrilling fashion as he stopped Bobby Jenkinson in the 9th round. He was then forced to relinquish the title and the opportunity was seized upon by Lane who outpointed Michael Ramabeletsa the following September. Turleys record of 18-6 and Lane’s record of 12-8-2 may not look that impressive on paper ,yet both men have shared the ring with some top fighters. Turley gave the world class Carl Frampton all he could handle back in 2011 while Lane has traded punches with Khalid Yafai and Gavin McDonnell on his way to collecting Area and English honours down at Bantamweight.Both fighters can box a bit while carrying underrated power, so this is certainly a contest that will thrill spectators in attendance.

You will often hear fighters saying they will fight anyone in a bid to perhaps create a buzz around themselves or for publicity, Treharris Lightweight Gavin Gwynne seems more then happy to back this sentiment up though as he continues to seek the top fighters in a talented domestic lightweight division. Welsh champion Gwynne will meet his English counterpart Myron Mills in Newport this week, in a fight that could well lead to the winner facing the likes of Scott Cardle and Lewis”sandman” Ritson in the very near future. The extremely likeable and dedicated Gwynne really showed he means business as he displayed heart, grit and of course skill that has been refined under the guidance of master trainer Tony Borg, to outpoint Cardiffs Henry Janes in a domestic classic back in December. Gwynnes momentum perhaps slighly faltered ,through no fault of his own following that Welsh title win, as Celtic title fights and a meeting with ex British champion Cardle didn’t come off for the Welshman. To his credit, Gwynne refused to take his eyes of the prize as he continued to graft in Tony Borgs Newport gym awaiting his opportunity. This will come in the form of talented English champion Myron Mills who fights out of Derby. Mills also boasts an unbeaten ledger in the pro ranks and has six knockout victories from his 12 wins to date. As well as capturing the English title against Marcus Ffrench, the Englishman collected the IBF youth title and will certainly be looking to come away from Wales with another victory. A great match-up and credit to both teams for taking a fight with a fellow unbeaten prospect.

The tremendous card continues with a fascinating domestic Derby to be fought for the Welsh title at Welterwight, between Mountain Ash’s Tony Dixon and Pontypool’s Keiran Gething. Again this is a contest that has divided public opinion with many believing the extra experience of Dixon who turned professional 4 years before Gething ,will prove the decisive factor. The fighter from Pontypool has other ideas though and has improved tremendously since he encountered a testing start to his pro career initially. Gething mercilessly retired Welsh boxing favourite Bradly Pryce and was extremely close to stopping iron man William Warburton who struggled with Gething’s Mexicn style of come forward pressure fighting. The aggressive style of Tony Dixon can only lead to an edge of your seat contest as the Mountain Ash man has proven he is capable of hurting any fighter at the weight and like his opponent, will come to the ring in tremendous shape Dixon has already won the Welsh title at the weight above with a destructive win over Mike Jones. He also earn’t the respect of thousands of TV viewers as he displayed a never say die attitude on his way to dropping a points decision against Hot prospect Ted Cheeseman. This fight cant disappoint and could join a long list of well matched classics we’ve witnessed in this country over the years.

The super talented Andrew Selby also makes his much anticipated return to the ring on the show. The Barry Flyweight Stylist needs little introduction to boxing fans after following up his elite amateur career with some simply mind blowing displays of pugilism since following World Champion brother Lee into the pro ranks back in 2015. Finding suitable opponents to test Selby proved very tricky initially for his team, with only the ultra game Louis Norman stepping up at domestic level. Selby was quite rightly moved into world class soon enough and put on a quite masterful performance ,when he bamboozled Nicaraguas Crisofer Rosales back in May of 2017. Rosales has since then added even more credibility to Selbys win by travelling to Japan and dethroning the formidable Daigo Higa to capture the WBC world flyweight title. Rosales then proved it was no fluke by travelling to Ireland and knocking out Paddy Barnes. Andrew Selby’s opponent for the night is yet to be confirmed but everyone is hoping it will be the first step towards being back mixing it with the world elite, which is were Selbys talents really should be.

Olympic silver medalist Fred Evans, also fighting out of the Borg Boxing camp will be looking to take his undefeated record to 6 wins from 6 contests, as he takes on 33 fight veteran Ryan Toms in a super welterweight bout over 6 rounds. Cardiff Southpaw Evans has comfortably beaten the likes of Adam Jones, Will Warburton and Daryl Sharp to date and will be hoping a victory over Toms will catapult him into title convention. Toms could well be Evan’s stiffest test to date and will certainly be looking to improve on the result of his last trip to Wales, which saw him taken out inside one round by Tony Dixon.

A serious illness unfortunately meant the withdrawal of Newport Middleweight Daniel Barton from his domestic title showdown with Geraint Goodridge. Thankfully Barton seems to be on the mend and it initially appeared the title match would go ahead with Jake Anthony looking to face off with Goodridge. However this bout also fell through with the British boxing board not preparing to sanction it. Goodridge, who has been following a strict training regime will not see his efforts go to waste has he is set to face an opponent yet to be confirmed on the Newport show. Goodridge who wears his heart on his sleeve will be looking to improve his record of 2-5-2 which was accumulated against very good opposition, and is sure to give his usual display of heart and determination.

Lets hope Goodridge’s initial bout for the welsh middleweight title against Dan Barton will go ahead in the not so distant future.

Nathan Thorley seems to be very much enjoying life with new trainer Gary Lockett. The light heavyweight from Cardiff has amassed an excellent recors of 11-0 which includes a knockout victory over felow Welshman Jermaine Asare which secured the Welsh light heavyweight title. Thorley who finds himself firmly in the domestic top 10,cannot afford any slip ups against Bulgarian Tayar Mehmed before his sights are set on the likes of Anthony Yarde, Callum Johnson and Josh Buatsi. Thorleys Eastern European opponent has campaigned as a heavyweight previously, and has shared the ring with quality operators such as Sam Sexton,Matty Askin and Dilian Whyte.

Swansea stylist Kristian Touze also has the opportunity to once again showcase his talents in Newport, and will be looking to get back to winnning ways after being held to a draw by Alec Bazza. Touze will take his record to 6-0-2 if he can get the better of Leeds journeyman Russ Midgley.

This fantastic events bill will also see the professional debuts of Jake Tinklin, Sion Yaxley and Robbie Vernon. Tinklin and Yaxley have actually met before as they faced off in last years Welsh open Amateur championship. Yaxley took home the coveted Welsh vest in a fight that showed both fighters have what it takes to be successful in the paid ranks. Tinklin who is well known for being able to box as well as scrap it out faces Kent’s Ricky Rose who has 3 wins and a draw from 13 contests.

Yaxley operated at an extremely high level as an amateur and is a technically gifted boxer with lighting fast hands and feet. Yaxley who comes from Ruthin will campaign as a welterweight and will box Paul Cummings who was beaten by Ricky Rowlands in his last visit to Wales.
The debut of Brigend’s Robbie Vernon takes on a bit of extra interest as in the opposing corner will be fellow Welshman JD Jones. Vernon has been training hard with Tony Borg and will have benefited from sparring the likes of the Selby Brothers, Robbie Turley and Gavin Gwynne.

Barry’s Jones has also been getting quality work in with the likes of Jake Robinson among others. Jones is yet to record a victory in his professional career but showed tremendous character to perform well in his last contest after being badly knocked out by Fonz Alexander.

This Mammoth Sanigar events show is certainly one not to be missed and covers the full spectrum of Welsh professional boxing, from exciting debutants to 50/50 title fights and future world title challengers. All the action will again be covered by S4C who continue to be fully behind the resurgence of Welsh boxing.

Tickets are still available and can be purchased via the boxers through all social media outlets.

This is definitely one not to miss.